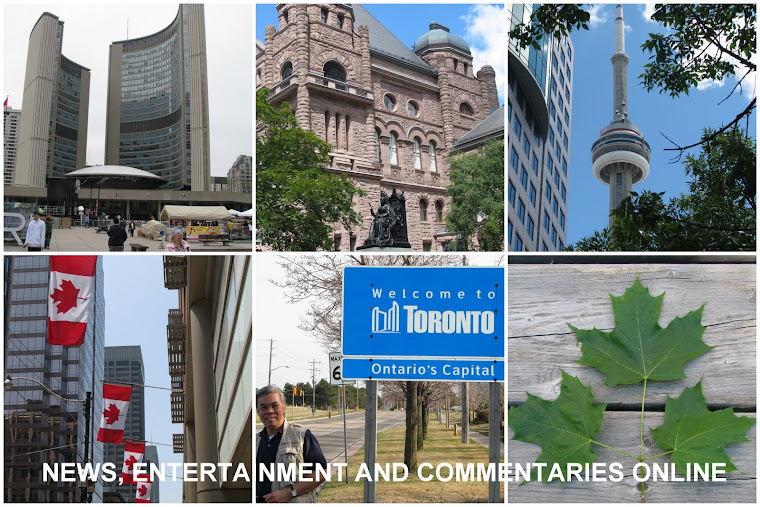 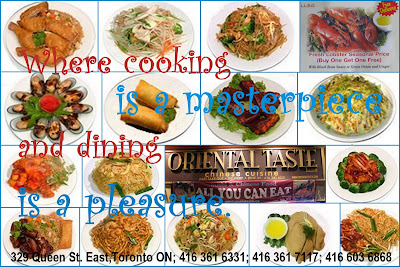 By ROMY MARQUEZ
It was on this cool Friday night of April 8 that media friends and I were walking along Queen St. near Yonge. We haven't seen much of the east part of that streetcar-filled avenue. So, from that famous intersection we explored the area within five kilometers.
Past Ontario and before Parliament steets, still on Queen East, we decided to drop by a restaurant named Oriental Taste. Its facade stands out in the rows of old and new buildings because of its distinctive orange and brown color.
To go there by streetcar from downtown, take streetcar #501 to Neville Park and get off at the Parliament stop. On the way back, the same streetcar goes to Humber.
Oriental Taste is a good place to dine in and to relax. That's what this place is all about in the heart of Toronto. The food is excellent. 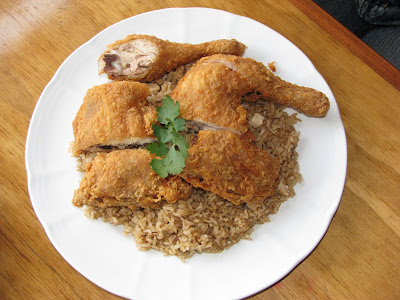 I ordered fried chicken and was pleasantly surprised to see half of it cut in several manageable pieces, with two legs, and served on a bed of fried chicken rice.

It wasn't only good. It was the best fried chicken I ever had since I left the Philippines nearly 20 years ago!


During those times in Manila, I enjoyed chicken in two places only - Aristocrat on Roxas Blvd. in Malate for barbecue chicken, and Max's Restaurant in Ermita for fried chicken.
The fried chicken here at Oriental Taste is outstanding though I still have to go visit the recently-opened Max's franchise in Vaughan and see how it fares. Absent that, I swear I'd go for Oriental Taste any time. (See ad: http://www.youtube.com/watch?v=Wdd8XEOTk50&feature=mfu_in_order&list=UL)
My "love at first bite" with Oriental Taste chicken told my curious mind: what's the secret here? who's behind the menu, specially the fried chicken?
And that led to one question after another.
I didn't realize the restaurant is owned and managed by a family, brothers and sisters, who are so gifted with culinary expertise and a gift for gab. 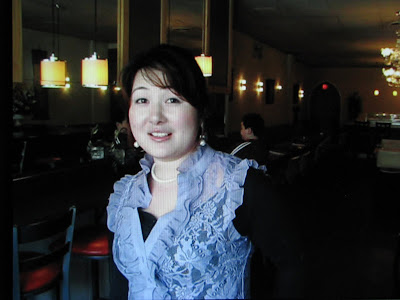 Gill Yu, also affectionately called Gail, is the manager, bar tender and customer relations person. Talented and beautiful, she's one reason the restaurant is at the top.
The other reason is her brother Jackie Li, the unpretentious and very knowledgeable chef who knows what makes a good food.
I learned that Jackie was head chef of Singapore Hilton before they put up Oriental taste almost 20 years ago. Knowing that now, all my questions became mooted. The food that Jackie prepares just speaks for itself.
As I munched on the chicken, the thought that was on my mind was that Singapore's loss is Toronto's gain.
Visit Oriental Taste and be prepared to affirm what I just said. 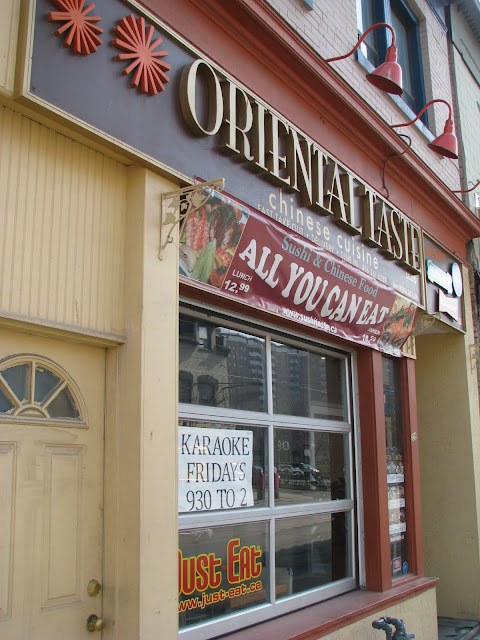 ﻿
﻿
Toronto Police Chief William Blair met with representatives of the different Asian communities and their respective diplomats in a continuing dialogue to improve community policing in Canada's largest city.

The town hall meeting at police headquarters on Monday,Nov. 8, 2010, gave authorities a quick glimpse into the issues and concerns affecting immigrant communities, notably language and culture.

"Our commitments continue to recruit (from minorities). When we recruit in our culturally diverse communities, we also know we have to speak to families because that is an important part of recruiting," Blair assured.

With that, Blair said, "we tranform Toronto Police Service. We become a different service because it is a service that has great diversity."

A newsvideo of the meeting is available at:
http://www.youtube.com/watch?v=guOWb5GaCys&feature=mfu_in_order&list=UL 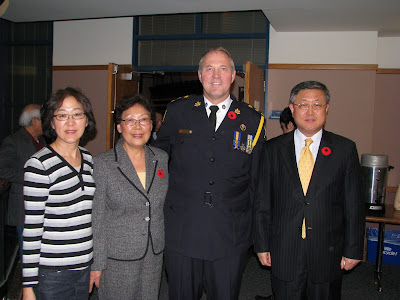 Posted by Romy Marquez at 10:48 AM No comments: 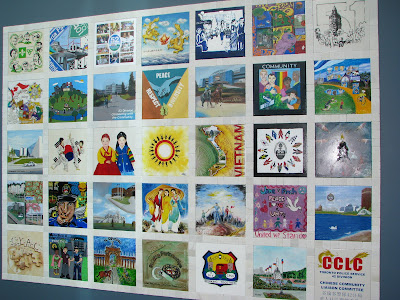 TORONTO - Asian artists who gave meaningful representation of their countries in a collection of tiles that now serves as a backdrop to community policing were recognized on Saturday (Sept. 25, 2010) by the Toronto Police Service.

S/Supt. Jane Wilcox handed out plaques of recognition to artists Frank Cruzet, Tam Nguyen and Kum Hee Yang for their works, which were among the 35 tiles that formed the Community Quilt of Tiles.

The huge quilt hangs on the Community Wall at Toronto Police College on Birmingham St. in Etobicoke.

The idea of the quilt came from Inspector Cory Brockus to highlight the contributions of the diverse communities of Toronto.

"By joining these images together, we reveal the strength and beauty of Toronto," Brockus said in a published statement.

For Cruzet, a former cop, he chose the landmark Rizal Monument in Manila's Luneta Park as the symbol to represent the Philippines. 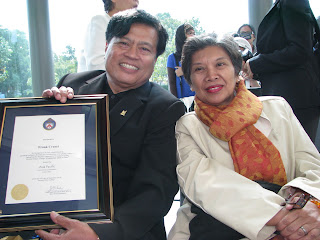 Philippine Consul General Minerva Falcon, one of the honored guests at the ceremony, said she was elated by Cruzet's theme as it "encapsulates the entirety of what we are about in the Philippines".

Yang's work is a representation of a part of a quilt with the theme of multiculturalism.

Posted by Romy Marquez at 6:52 AM No comments:

Politics Need Not Be a Blood Sport, Says Mayoral Candidate


No Mudslinging for Phil Taylor
By Romy Marquez


TORONTO - With the way mainstream media is portraying the Oct. 25 election, voters don't seem to have much of a choice. As if there's a dearth of qualified people.

The truth is, out of the five candidates getting all the media attention, there are thirty-two others less conspicuous but probably more qualified to run Toronto as mayor.

For the most part they are faceless, no name recall like a Miller or Ford, or a Harper or Ignatief, but just as enthusiastic to change the culture of politics at City Hall.

Soft-spoken with an immense capacity to bear no malice towards anyone, he refuses to engage in the current muck-racking among the mainstream media's five, namely, in alphabetical order, Rob Ford, Jose Pantalone, Rocco Rossi, George Smitherman and Sarah Thomson.

Every tired word, every irrelevant issue, every little gaffe are magnified a thousand times by these media and re-echoed a hundred times more in cyberspace so long as they are spewed from any of the five mouths of the talking heads.

It is in this context that Phil Taylor is a refreshing sight, perhaps a re-energizing change for all Toronto.

"I choose not to make this politics a blood sport," he declares in an interview with this reporter. It is his belief, he said, that running for a public office need not be that bloody and insulting.

Taylor preaches love, harmony and amity not for the sake of maintaining the status quo, as in the way public affairs are run and managed at City Hall, but as a means of evoking positives from everyone and preserving goodwill inherent in every man.

Asked why he stays quiet amidst the rancour among the candidates, he retorts: "That's not the path I want to go down".

Taylor premises his run for Toronto mayor on the glaring fact that only 35 percent of registered voters have gone to vote in the past elections.

"This means people are discouraged," he explains. "They're not showing up in polls".

He adds: "That also means that people in positions of power and the candidates themselves are not addressing the majority of Torontonians".

"The core is this: People don't care how much you know until they know how much you care," Taylor states, sounding philosophical.

"The real question is: Do they really care? I just want to know if you care about me," he says.

Taylor does care enough for Toronto and its 2.48 million population (5.5 million in the Greater Toronto Area) that he wants to roll back taxes if he gets elected, and cut the mayor's salary. At least those two items are high in his agenda.

"Half of their (the population) life is being hijacked by the government through taxes," he explains. "We are not finding solutions by increasing taxes," he adds.

To know more about the election, please visit the city's official website at: http://www.toronto.ca/elections/

While the main page is under construction, we're providing our readers with links to the major newspapers in Toronto:

The wealth of our Toronto is in its diverse communities and in its multi-culturalism. The languages we speak, the traditions we observe, the faith we believe in, vary from one neighbourhood to another. Yet we are one big community. This Toronto News Room is our blog, the equivalent of our community's giant billboard. We invite people of all persuasions to write their news, opinions and life-enriching events about their communities in Toronto and email them to TorontoNewsRoom@gmail.com.